Join us for free and get valuable insights that go beyond the articles posted here.

Your privacy and email address are safe with us.

In this article I will show you why understanding conflict will make you a better writer and help you to create engaging stories that capture the reader’s imagination. I will also show you how to avoid creating boring and one dimensional characters. 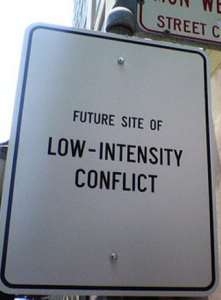 In a previous article I discussed the importance of structuring your novel. I suggested you use a 3 or 5 Act structure which, in brief, contains an initial inciting incident which compels the protagonist to act (Act 1), a climax that sees the inciting incident resolved (Act 2), and a section of resolution that ties up all of the loose ends (Act 3). A very basic example of this would be a crime novel. The inciting incident would be the discovery of a body, the climax is the solving of the crime and capture of the murderer, the resolution is the motive behind the crime and the character’s actions.

The beginning of traditionally structured novels sees an inciting incident. Once this incident has occurred the writer has set up a level of tension within the reader’s mind. The reader knows this incident must be resolved and they will keep reading to seek the emotional release set up by the inciting incident, this is just human nature at work. This is the cliff hanger effect. Imagine someone telling you the set up to a joke in the morning and then refusing to tell you the punch line until the next day. It would drive you insane! No matter how poor the joke, your natural instinct will drive you to resolve the mystery. Writers can exploit this human trait.

The set-up and resolution of smaller conflicts, within the novels wider tension that comes from the resolution of the inciting incident, is the bricks and mortar of a novel. The best way to do this is through the protagonist’s reaction to events. Whilst these events may represent physical conflict, they may also illustrate other levels of conflict. The choices a character makes and how these reflect internal dialogues can be illustrated by how they react to a particular event. It is the way the protagonist faces and resolves the conflict, whilst in the search to resolve the final inciting incident, that will keep the reader interested and more importantly reading to the last page.

The Three Types Of Conflict

In his book Story, Robert McKee explains that there are three types or levels of conflict:

Inner conflict is the level of conflict at which novels have the advantage over other mediums such as films. The inner conflict is the voice that plays inside everyone’s head, it is their thinking, decision making, sets of beliefs, prejudices etc. A skilful writer will establish an inner voice for their main characters and then demonstrate how this conflicts with external events and actions. The beauty of a novel is that you can ‘show’ a reader the protagonist’s inner thoughts. You can demonstrate how they are at conflict as they struggle through a string of events. A good example of a novel that uses inner conflict well is The Naked Lunch by William S. Burroughs.

Personal conflict is the next level up and focuses on the conflict that arises from the interaction between characters. Conflict in this context is not violence (though that may be an option). Conflict is simply a set of circumstances/events/thoughts that are opposed to the protagonists’ wishes as they move to the resolution of the inciting incident. McKee suggests that a good example of personal conflict is the soap opera. I would add to this that any great love story operates on a personal conflict level – boy meets girl, boy falls in love with girl, girl’s parents disapprove of the relationship…

The best novels use all three levels of conflict. A great example of this has already been mentioned, and that’s Orwell’s 1984. Orwell demonstrates a masterful use of conflict in this book as he drags the reader to the book’s inevitable conclusion. The inciting incident comes when the protagonist (Winston Smith) receives a note that simply says, ‘I love you’. This note forces a string of inner, personal and extra-personal conflicts as Winston Smith is forced to act. This then sets up a situation that must inevitably be resolved. At the highest level there is constant extra-personal conflict as Big Brother looks on, dictating the every move and thought of Winston Smith. The personal conflict is brought into sharp focus as Winston Smith’s relationship with Julia develops, a relationship that is forbidden by Big Brother. The final level of conflict, inner conflict, is presented throughout the book as Winston Smith struggles to reconcile his own internal thoughts, and desires with the propaganda of Big Brother. In fact, you could argue that what makes 1984 such a successful novel is not its dystopia vision, but the deeper questions that Winston smith is force to ask and answer via the inner conflict.

I suggest that, if you do nothing else having read this article, it would be to start looking at novels and stories in relation to conflict. I would suggest you read a novel, a bestselling ‘classic’ is a good place to start, and view the novel in terms of locating the inciting incident, whilst also recognising internal, personal and extra-personal conflict.

Each year thousands of book proposals are rejected by agents and publishers.

We can help you to make sure that this does not happen to your book.

Grab Our Free 19-Part How to Write a Fiction Book Proposal Course...

The Query Letter That Won Me a Four Book Deal.

How To Write A Successful Book Proposal

Why Understanding Conflict Will Make You A Better Writer

See How Easily You Can Format Dialogue

What Is The Point Of Writing A Book If You Have No Online Presence?